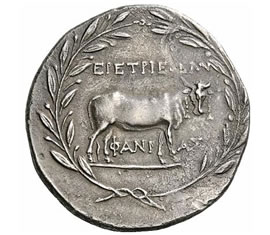 The Ancient theater of Eretria
Ancient Theatre of Eretria. The original construction dates from the 5th century BC and during the fourth century made great prosperity. Destroyed in 198 BC by the Romans and anakateskefastike more casual materials. This is a very impressive monument which has many similarities with the Theatre of Dionysus in Athens. Unfortunately most of the seats have been stolen. Excavated by the American School of Archaeology and restoration continues today.   Medieval Tomb of the 4th century.

The Museum of Eretria
The temporary exhibition “Eretria: Insights into an Ancient City” was hosted at the National Archaeological Museum from April 26th to August 25th, 2010.

The exhibition, which is co-organized by the National Archaeological Museum and the IA’ Ephorate of Prehistoric and Classical Antiquities and is an initiative of the Swiss School of Archaeology, will narrate the past of the city of Eretria and central Euboea from their origins until Late Antiquity.

The aim of the exhibition is to present in a lively and original way the life of an ancient Greek city through excavation finds, drawing reconstructions, models and video projections.

The exhibition is realized with funds from the Swiss School of Archaeology, the only permanent archaeological mission outside Switzerland. Since its foundation in 1964, the Swiss School of Archaeology excavates and studies the ruins of ancient Eretria in Euboea. All the buildings that have been researched by Swiss archaeologists have been preserved and most of them are open to the public.

Acropolis of Eretria
Ruins of ancient Eretria, scattered throughout the city, from the coastal zone up the hill, where we meet the Acropolis building constructed in the 3rd century. BC

The House of the Mosaics
The discovery of an exceptional set of pebble mosaics from the 4th century BC, in perfect condition, raised from the outset a question of principle: could one preserve these precious mosaics on site, or must they be taken up and moved to the Museum? The first solution was selected, thanks to the support of generous patrons, Heidi and Hellmut Baumann, who took a passionate interest in the House of the Mosaics and agreed to pay for the restoration of the mosaics, and then for the design and construction of the pavilion.  After much consideration and many consultations, the Greek archaeological authorities decided upon the construction of a modern pavilion on the foundations provided by the ancient walls. It was important that the pavilion can withstand an earthquake and that it fit in well with the structures surrounding it. White walls surmounted by wooden beams and a tile roof were chosen. Drainage is provided by copper flumes. Large windows with unbreakable panes allow a good view of the mosaics while at the same time protecting them from vandalism.

The tomb of "Love"
This is a grave Macedonian type dating from the late 4th century. BC, a period during which, after the Macedonians also in southern Greece funerary monuments of this type. Among other findings of the tomb, now exhibited at the Metropolitan Museum of New York, found and clay statuettes of Eros, which is the current name of the monument. Located on the hill northwest of Eretria and maintained in good condition.

The Sanctuary Apollo
In the sanctuary of Apollo at Eretria Daphnephoros discovered the remains of various phases of operation (the first Hekatompedon arched church during the 8th century BC, above him a pavilion ionic early sixth century BC and third, too pavilion, but Dorian end of that century, was destroyed during the Persian invasion in 490 BC).   The pine Island of Dreams with tourist facilities

The house of Kanaris
The house of Kanaris Kanaris built in 1847 in his home in Eretria. It is a two-storey neoclassical building in which resided until 1864, then made a second time, prime minister and regent of choras.To this building survives today, belongs to a private person and there are efforts by the municipality of Eretria to reach the cultural heritage and to undertake maintenance.